DO YOU HAVE METAL TO RECYCLE? CALL MANVILLE

As a leading Canadian recyclers, we accept and collect all of your recyclable material.

Is a grayish silver in color and non magnetic. Aluminium is a versatile metal with a multitude of applications, aerospace and automotive being the two main industries. Aluminium is also a good conductor of heat and electricity at about 60% of copper. It is light, durable and of low density making it an excellent alternative to steel in truck bodies and framing.

UBC or used beverage cans must be aluminum and must come in clear plastic. Cans brought in opaque plastic bags will be purchased at a lower rate.

Cast aluminium is cast in a mold to make different forms. It is usually a mix of many diferent series of aluminium and as a rule must contain less than 2% iron and be free of all other contaminants, e.g., zinc.

Irony aluminium is aluminium with a steel content above 5%. Mixed Irony Aluminum shall consist of assorted scrap aluminum contaminated with Iron, the aluminum content must be a minimum 70% and iron may not exceed 30%. Must be free of excessive plastics, oils and other materials prohibitive in the sweat furnace operation.

Litho is used in the printing industry. It should be free of contaminants and have the paper removed.

Aluminium Radiators from vehicles. Come clean or with steel and/or plastic.

Aluminium machine turnings must be free of lubricant or cutting oil (a milky white liquid).

The rim is the “outer edge of a wheel from a truck, holding the tire”. It makes up the outer circular design of the wheel on which the inside edge of the tire is mounted on vehicles and made with Aluminum. All rims must have the tires removed.

Painted aluminium is flat or rolled aluminium. It is usually used for siding and eavestrough.

Aluminium rims from cars. Regular, chrome, and chrome clad rims. All rims must have the tires removed.

ACSR is aluminium wire with a steel reinforced core. May come with or without insulation.

Manufacturing process in which a softened blank of a metal or plastic material is forced through a shaped metal piece or die to produce a continuous ribbon of the formed product. 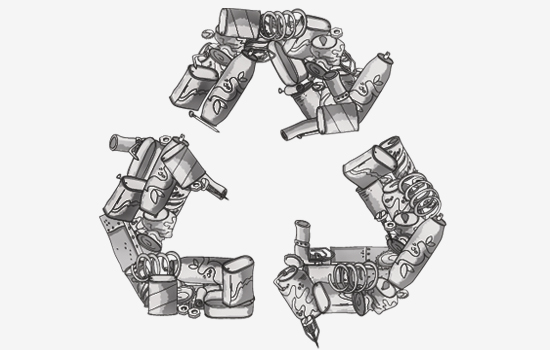 Here’s an interesting fact: recycling one aluminum can save enough energy to run a TV for 3 hours. And while it can be a simple task to just throw your aluminum can into the recycling bin, chances are you haven’t considered the actual numbers and figures you are contributing to when it comes to scrap metal recycling. Most scrap metal is collected from old steel structures, cars, appliances, ships, railroads, factories, waste electronics and other sources that contain metal in some way. Scrap metal gets processed in factories where they melt it down to commodity grade material that is used to produce new products. There are plenty of noteworthy facts on metal recycling to discover.

Can You Recycle Rusted Metals?

Rust is the common name for a chemical compound known as iron oxide. This compound forms when iron reacts with water and oxygen, presenting itself as a rough, orange-red substance. Technically speaking, only iron and alloys that contain iron can rust. Other metals, including precious metals like gold and silver, can corrode in a similar way.

The duration of time it takes for certain metals to begin rusting (or corroding) is what sets these materials apart. Regardless, in almost all cases, rust is a nuisance. Not only is it unsightly, its a hindrance to functionality as well. If you allow rust to exist on a metal object for a long enough period of time, it can start to eat through the object, slowly compromising its structural integrity.

The good news, however, is rust can often be removed. Because it can be removed, rusted metal objects can usually still be recycled.

Be warned though. The more rust that eats away as a metal object, the less that object is going to weight, and the less money you’ll be able to get for recycling it.

Copper does not rust, however, it does corrode. Copper is naturally brown and turns a shade of bright green as it corrodes. While some consider copper’s reaction to be tarnish rather than oxidation, the metal still undergoes a similar “rusting” process.

The fact of the matter is that regardless of whether or not you remove it, rust can reduce the recycling value of a metal item. For this reason, its wise to try to prevent rust from forming in the first place.

If you have metal object that are only slightly rusted, you can usually rid remove the rust in just a short amount of time. There are a number of substances that can be used to remove rust from metal. In most cases, however, its easiest to try to remove rust with a sander or grinder.

If you have have heavily-rusted items on your hands, and if you’re looking to recycle them, your best bet would be to sell them to a metal recycling company. After rust is already caked on any object, its nearly impossible to remove entirely.

However, keep in mind that a metal recycling company will be able to melt down your rusted metal objects, separating their usable parts so that they can be used for new purposes.